Hey lovelies,so I’ve made my own lip balm and now I’ve just made my own deodorant. Here’s why you should try out this recipe or something of the same. 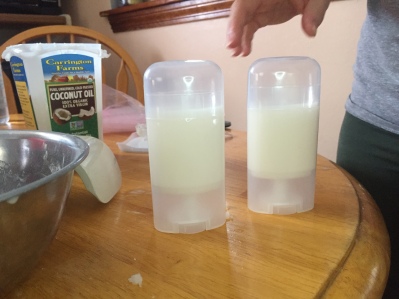 Being a girl that suffers from hyperhidrosis (excessive sweating) deodorants and antiperspirants are a definite must. Only problem is that, setting aside the ridiculous amount of money spent on them every year, the ingredients aren’t doing my body any good at all. There are 5 ingredients in most deodorants that are harmful/toxic or irritating:

Parabens: Now they aren’t exactly good or bad, a preservative in cosmetics and such to keep them from going moldy, gross, and bacteria filled–so not exactly an evil ingredient. I think in small amounts they are all right. A 2004 study led to the misunderstanding that parabens can cause, in a nutshell, breast cancer. Even so it isn’t fully proven that it has a direct cause of that, I’m still wary. Small or large amounts, I do my best to stray away if I can.

Aluminum: This another thing that has said to be linked to breast cancer. These aluminum compounds are basically a plug in your sweat ducts and stop the flow of sweat, clogging everything up. You absorb them of course and they can be harmful to your body.

Silica: A mineral that like the above has been said could be linked to causing cancer. I’m not sure what to believe: I’ve heard that there’s as much good as there is bad and so I am weary and cautious.

Propylene glycol: A petroleum based substance that can irritate the skin. It can cause lots of itching in some people and it said there is potential for toxicity.

Phthalates: Plasticizing chemicals that are considered to be endocrine disrupting, conflicting with your hormones.

Steareth-n: That ‘n’ could be a number–1, for example. Derived from vegetable, but can react with “ethylene oxide” to form a carcinogenic compound. Also linked to causing cancer. 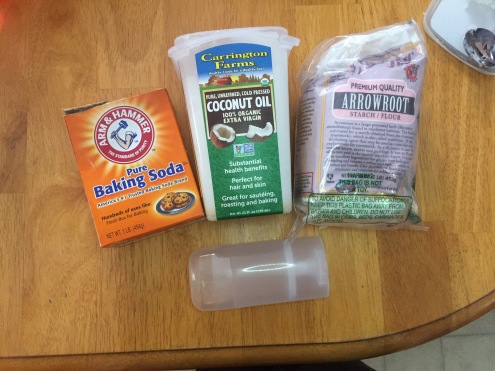 Forgot to put the essential oil in the picture. Ooops 😦

This four ingredient recipe is free of all those. So it’ll save you money and take better care of your body. Everything used to make my sweet orange deodorant was purchased on Amazon. Remember that this recipe I’ve seen scattered across the internet is no a antiperspirant. That means it will not prevent and reduce sweating, but it will be good for your body and keep you smelling nice. Here’s the recipe:

Ingredients:
1/2 cup of Carrington Farms Coconut oil. (natural moisturizer, antibacterial shield, fights fungal infections, a fragrance by itself.)
1/4 tablespoon of Bob’s Red Mill Arrowroot powder. You can use cornstarch, but arrowroot is gentler so I wouldn’t use it, especially if you have sensitive skin. (helps absorb moisture and a thickener)
1/4 cup of Baking Soda. (neutralizes odor and a great thickener as well)
10-20, or as much as you want, drops of essential oil. I used about 15-20 of Sweet Orange.

How to put together & make:
First off: melt your coconut oil into liquid.
Next: combine with your arrowroot and baking soda, mixing well with a whisk until smooth.
Then: Add in your essential oils. Lavender is a good one, but I’m not a fan of the crap one I got in a mix with others at a craft store so I used my sweet orange that I love. I wanted to add in a few drops of tea tree oil, but mine hadn’t come in the mail yet and I just wanted to make the stuff already while I had a day off from work.
(Keep in mind you don’t need a day off or many hours to do this. It’s very quick and easy, I’ve just been sick and tired.)
Lastly: Add to a mason jar or empty deodorant tubes like I did. With this recipe, I was able to fill up 2 tubes.

Now, because of the coconut oil it’s very watery and runny. Just pop it into the fridge so it can all come together and become solid. I think next time I will use a little less coconut oil because, though it dries very fast, it’s annoying to apply and have it be so “oily”. Though keeping it in the fridge does help. You can do that like me and then apply when needed. I’ve been doing morning and night. But apply whenever throughout the day, it isn’t going to dry out or irritate your skin.

That’s it, lovelies. Four ingredients and doesn’t even take ten minutes to make and put together. If you have a recipe you’ve used or have seen, let me know! 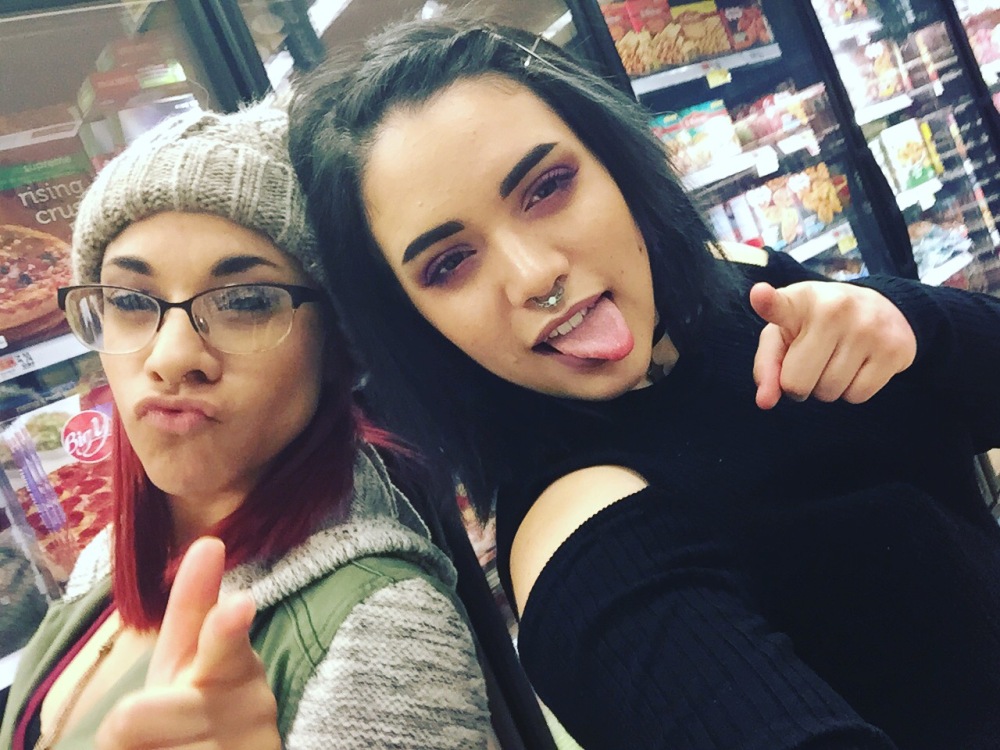